Get in touch request a call back

Want a false ceiling in your home? Let us get in touch with you.

Everything you need to know about house false ceilings

A good ceiling is just as integral as any other part of the home. It needs to be sturdy and strong, but it also has to fit in and add to that overall aesthetic of the house. Since the aesthetics and design are very limited in the traditional ceilings, a lot of people are now turning to false ceilings to beautify their homes.

While looking for the best false ceiling designs for your house or your establishment, it is also integral to look for a thermally efficient as well as fire-resistant option, which will keep you, your family, or your employees safe in case of a mishap. In today’s times, a ceiling cannot be a mere fifth wall. It has to be aesthetic as well as safe, and these things should be kept in mind when one is looking to do their room ceiling design. False ceiling has come out as the most chosen option for homeowners as well as those looking to design their office, due to the various advantages it has attached to it along with the beauty part.

Thorough research is a must when choosing to do your ceiling, by the homeowner or the contractor. Having knowledge about different false ceiling designs, its properties, its advantages as well as their disadvantages is very integral when making a decision. Read further to know a little more about the best false ceilings designs and the pros and cons of false ceiling installation in your homes.

What is a false ceiling?

A false ceiling also called a dropped ceiling, is an artificial ceiling that hangs below the main ceiling of the house. It is suspended by wooden or metal frames and is crafted out of various materials such as gypsum, plaster of Paris (PoP), wood, etc. These materials are rather moldable and hence can be given any shape or pattern that the owner desires to have in his room. Since the material used for most false ceilings are lightweight, they are easy to install, and also since there is no use to powder cement as such it tends to give out much lesser dust as compared to traditional roofs.

Most commercial or house false ceilings have LEDs pre-installed with the ceiling, thus reducing the power consumption and reducing your expenditure on electricity. The false ceilings have become a widely liked phenomenon and have been installed in many homes, offices, and basements due to their aesthetic appeal and their economic advantage over traditional ceilings. 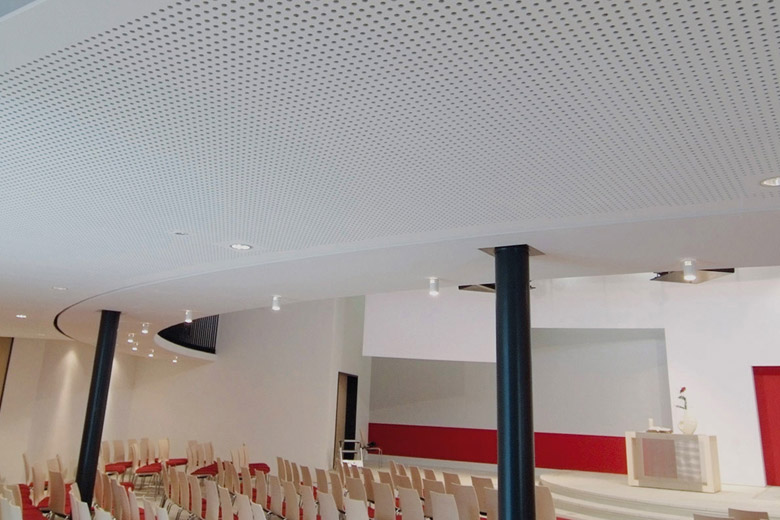 Gypsum boards are the most popularly used material for false ceilings due to their lightweight tendencies, design appeal, and fire, moisture, and sound resistance. This is the most ideal materials for a room ceiling design since it is an environmentally friendly option for those opting for a false ceiling Plaster of Paris is the second most commonly used false ceiling material due to the smooth finish it provides. It is easy to level and can be molded in any shape. PoP ceilings have good insulation and are long-lasting even in varying weather conditions. 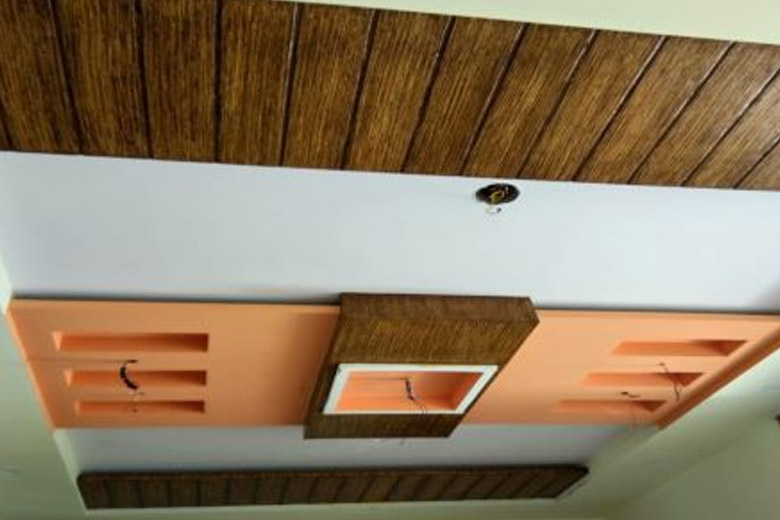 Due to its natural texture and classic look, wood has found its way into the false ceiling family. A wooden false ceiling has great sound absorption and helps save energy when installed. It is however on the pricier side and hence is normally found in residential projects as opposed to commercial projects.

A false ceiling is custom designed and if made out of durable material such as gypsum or PoP, it can last up to 20 years under normal conditions. It is the most ideal option for contractors

working on a commercial building. Due to its aesthetic advantage, the building looks good if any client visits. Additionally, using fire-resistant and thermally efficient boards keeps the employees comfortable and gives them a sense of safety, in case of any mishap.

Similarly, for a homeowner designing or redesigning their roof, a false ceiling is the most ideal option due to the dust-free installation as well as the cleaner looking, aesthetically appealing ceilings. Adding a false ceiling to any space can completely transform the space into your dream style. Be it elegant, dramatic, or whimsical, a suitable false ceiling will help achieve that look in a snap!

Transform Your House in No Time

What is the one thing that comes to your mind when you see the bare and gloomy wall ceilings of your new house? The need for getting nice wall décor, right? There’s no denying that moving in to a new place invites a lot of stress. But decorating your house the way you want to is as important. It is something that is going to stay for your life time. If you want to give your home a perfect designer ceiling solution, then you have come to the right place. At Saint Gobain Gyproc, we have got you an irresistibly attractive range of wall and surface solutions that will give your ceilings and wall panels an aesthetically new look. Our products and services includes Gypsum ceiling tiles, plasterboards, metal framing system, accessories, drywall & plastering, etc.

So Many Designs to Choose From

Style Your Abode with Gyproc

Gyproc offers the best-in-class false ceiling solutions to add grandeur to your home décor. We allow you to choose from an extensive range of residential false ceiling designs as well as drywall and plastering solutions to give your home or office space a pleasant vibe. The new ceiling design will make your guests be in awe the moment they step in to your house. Through the right planning and artistic ideas, you could renovate your house in a blink of an eye.

You could browse through our product catalogues and select the best false ceiling design that suits your needs. We promise you to get your ceiling designed in just 7 days. All you need to do is to fill a contact form to book a professional visit to your location. We will also help you choose the ceiling design and color based on your budget. So you could, simply relax while we transform your house from ordinary to extraordinary.

The fifth wall or the ceiling has now become just as integral part of the decor as other spaces of the house. A bare and gloomy ceiling design for hall is something no one would like in their house. Decorating the hall ceiling is very important as that is where all your guests come in. Your living room ceiling gives people the glimpse of how your home might look on the inside as well. Beautiful and aesthetically pleasing false ceiling designs for living room bring a touch of finesse to your home.

If chosen carefully, false ceiling designs can enliven your room and decor manifold. On the other hand if enough attention and thought is not put in when designing your living room ceiling design, the decor and ceiling may look out-of-sync and may not look as good as you would have planned. Ceilings that compliment your surroundings can uplift the beauty of your space as well as create an ambiance of tranquility and peace.

If giving your bedroom the perfect designer false ceiling is what you aim, then it is our job to make it easy for you. At Gyproc, delivering irresistibly beautiful false ceiling design for bedrooms is what we thrive for. Transforming your home in no time, when you choose Gyproc. Enlivening your favourite space in the house can make you fall even more in love with your house. A false ceiling design for bedroom can match any decor that you wish to establish in your bedroom.

Kids have a creative imagination and as a parent, you would always like to give their imagination a boost, so how about a dreamy, imaginative ceiling? Whether you child fancies princesses or race cars, a starry night or meadows, Gyproc offers all kinds of false ceiling designs for kids rooms. So why not use a false ceiling design for kids room as per their liking and give their imagination the boost it requires with a ceiling solution that is as attentive as your child.

A colourful and whimsical kids room false ceiling lets your child wander into their own land of imagination. As studies show, different colours and prints are supposed to help in your child's development and what better way to do it than via beautiful and colorful ceilings. Kids room false ceiling is something that your child looks up to almost all the time, and giving them the most beautiful designs and colors that they like is Gyproc’s job!

Kitchen is the most important space in a house, and is often left bare and unsightly. It is the room that is usually paid less attention to when looking to design a house. What is important to be known is that your kitchen ceiling design has to be in sync with the rest of your home. Just installing a modular kitchen would not make your kitchen look good. A kitchen is much more than a cooking spot, it's where your guests can sit or help when having a party.

It is important that your kitchen decor is in sync with the rest of your home as well as beautiful enough to invite a few friends or family over when hosting a party of a small get-together. The kitchen becomes the perfect spot for such intimate gatherings and a beautiful kitchen ceiling design can give an added charm to such gatherings and we at Gyproc can help achieve that!

We use our own and third party cookies in order to improve your experience and our service. With the aid of cookies we analyze the typical use pattern of visitors to the website. Your continued use of our website shall be conclusively deemed acceptance of the use of cookies. For further information please read our Disclaimer.

Talk to our Experts